The meeting is to take place on Thursday 12th February 2009 at The Coffee Tavern from 7:30pm.

WHATEVER YOUR AGE WE VALUE YOUR OPINION

You can also leave your thoughts about the installation of a Skatepark & Youth Meeting Point using the boxes below.

Eaton Bray Parish Council is looking into the possibility of installing a Skateboarding/BMX area at School Lane Recreation Ground.

A public consultation was held on 12th February (discussed in the February 2009 minutes).

What happened at the public meeting on 12th February?  And why was no mentioned made of this meeting in the Focus Magazine under "Highlights of the PC meeting held on 5th January"?  And who circulated today (25th Feb) a flyer inviting opposition to the proposed Skate Park? 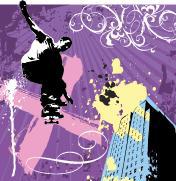 A new area has now been created on the Parish Council website which will contain reports/proposed plans, etc about the proposed Skateboarding/BMX Area, as they become available.

The proposals will be further discussed at the next Parish Council meeting on 2nd March 2009.

Please continue to add your comments and thoughts about the proposals under this forum topic.

I think that the skatepark is to encouraged, the youth of the parish need more to occupy them and give them more opportunities to socialise safely. However, I trust that the council will look very carefully at the construction of the park as graffitti is something which seems to go hand in hand with this type of facility and some surfaces are more graffitti friendly than others!

The parish council website has now been updated with a set of Questions & Answers, plus a plan of the proposed Skateboarding/BMX Area site.

I think I, along with many parents in the village are not looking forward to the arrival of the skate park in particular due to its proposed location so close to the childrens play area. Whilst I have no issue with older children wanting somewhere to hang out and burn some energy off, the proximity so close to the smaller childrens play area will be intimidating and unpleasant. I can say from personal experience the current childrens play area suffers from litter, often beer cans left after a weekend. I have also seen children smoking drugs and generally hanging around the play area also in the past. It isnt encouraging to takes ones babies/toddlers to the park and see teenagers already on the swings and benches smoking and drinking etc. So my answer is, YES good idea to the skate park but NO...bad idea to where you want to put it. Another 100 yards away elsewhere in the park would be a much better compromise and satisfy far more people.

Skateboarding ain`t a bad idea, but
so that any participants of the
sport can burn up all suppressed
energy put it in Dolittle Lane, so
that no one is intimidated by it`s
proximity.

just wondering if any one had a old bmx or bmx frame that i could take off your hands im willing to pay ??

Any comments regarding the skatepark now its been completed for a few weeks? Being closely involved with the project, im interested to hear what people think of it now its here.

Edd, I commented earlier on about the location of the skate park. I also wasnt a huge fan and wait to see what the summer may bring (at the moment, people hanging round there late at night prob isnt that attractive an option) and I dont like it being next to the swings/slide play area. Having said all that, the end result is not so bad and people seem to be using it responsibly at the moment, so am prepared to accept it might turn out to be a good thing for the kids in the village. However I baulk at the cost of it...but I'm also for looking forward, not back, the work is done now. Lets enjoy it. Lastly, whats the chance of someone doing up the toddlers play area...? The antique wooden climbing frames would do with replacing as would the swings. The current ones are ok, but a short trip to some other villages (stoke mandeville park is a jaw dropper...excellent park) will show how poor EB facilities are. However I suppose there is no money left after the skate park :-(

Having detoured yeaterday, via the skate park, to see things for myself: I have to say how impressive not only the facility but the sheer numbers of users visible. They were organising themselves for fair turns, which over the age span present is no mean feat. It was a great sight to see so many engaged, I only wish I were brave enough to attempt...

Just seen a comment about lighting not being allowed at the Skatepark.